Skewness and Kurtosis in Statistics 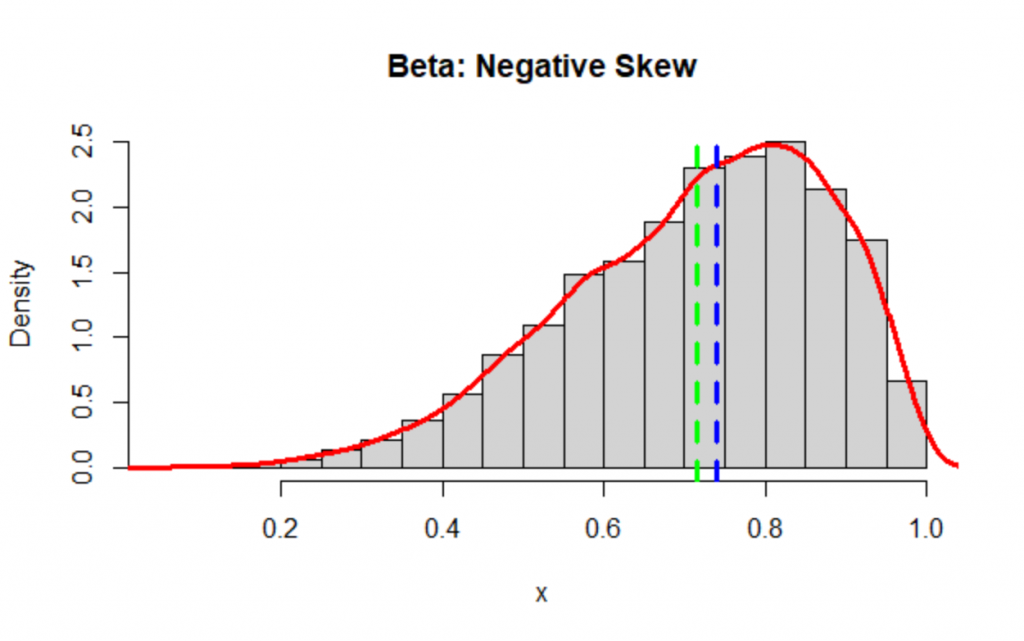 Most commonly a distribution is described by its mean and variance which are the first and second moments respectively. Another less common measures are the skewness (third moment) and the kurtosis (fourth moment). Today, we will try to give a brief explanation of these measures and we will show how we can calculate them in R.

The skewness is a measure of the asymmetry of the probability distribution assuming a unimodal distribution and is given by the third standardized moment.

The graph below describes the three cases of skewness. Focus on the Mean and Median.

The skewness can be calculated from the following formula:

There are many different approaches to the interpretation of the skewness values. A rule of thumb states that:

Let’s calculate the skewness of three distribution. We will show three cases, such as a symmetrical one, and one positive and negative skew respectively.

We know that the normal distribution is symmetrical.

The exponential distribution is positive skew:

The beta distribution with hyper-parameters α=5 and β=2

Notice that the green vertical line is the mean and the blue one is the median.

Let’s see how we can calculate the skewness by applying the formula:

Notice that you can also calculate the skewness with the following packages:

There are some rounding differences between those two packages. Also at the e1071 the formula is without subtracting the 1from the (N-1).

Notice that we define the excess kurtosis as kurtosis minus 3

The kurtosis can be derived from the following formula:

Kurtosis is the average of the standardized data raised to the fourth power. Any standardized values that are less than 1 (i.e., data within one standard deviation of the mean, where the “peak” would be), contribute virtually nothing to kurtosis, since raising a number that is less than 1 to the fourth power makes it closer to zero. The only data values (observed or observable) that contribute to kurtosis in any meaningful way are those outside the region of the peak; i.e., the outliers. Therefore, kurtosis measures outliers only; it measures nothing about the “peak”.

Let’s try to calculate the kurtosis of some cases:

As expected we got a value close to 3!

As expected we get a positive excess kurtosis (i.e. greater than 3) since the distribution has a sharper peak.

As expected we get a negative excess kurtosis (i.e. less than 3) since the distribution has a lower peak.

Notice that you can also calculate the kurtosis with the following packages:

We provided a brief explanation of two very important measures in statistics and we showed how we can calculate them in R. I would suggest that apart from sharing only the mean and the variance of the distribution to add also the skewness and the kurtosis since we get a better understanding of the data.

6 thoughts on “Skewness and Kurtosis in Statistics”

PrevPreviousHack: How to create GIF Images in Python
NextHow to Build a Predictive Soccer ModelNext