How to Test for Randomness 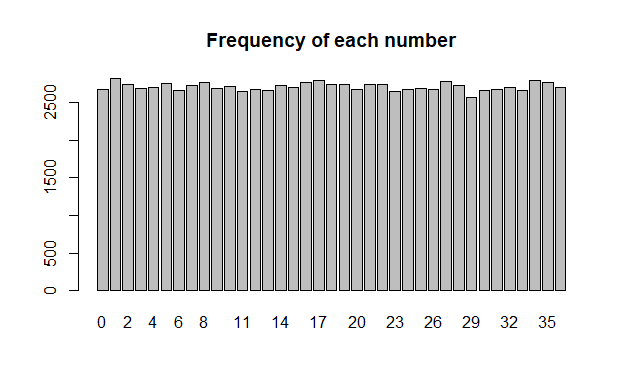 I have been contacted by many people asking me to predict the outcome of some events that in theory are random. For example, they want me to predict lottery games like Keno, Lotto, Casino Roulette numbers and so on so forth. My answer is that you cannot predict something which is supposed to be random. No model can give you a better estimate than what you already know, for example, in roulette the probability to get the number 0 is 1/37 no matter what were the previous numbers. This implies that before start building advanced Machine Learning and Artificial Intelligence models to predict the outcome of the next draw, try to check if these numbers are actually random. If they are actual random then it means that there is no pattern and you should not waste your time with ML and AI.

For demonstration purposes, we will assume that we are dealing with numbers obtained from an unbiased casino roulette with numbers from 0 to 36. Let’s create our sample in R.

Chi-Square Test for the Frequency of the Numbers

As we can see the p-value is greater than 5% which means that we do not reject the null hypothesis which was that the distribution of the digit was independent. Of course, this test does not check if there is a pattern in the way that the numbers are served.

A quick way to see if there is a pattern in the way that the numbers are served is to plot the acf and pacf.

If you see get similar plots as the above ones it means that there is no correlation between the current drawn number with the previous (lag) ones.

Regarding the sequence of the numbers, we can apply the Wald-Wolfowitz Runs Test that is a non-parametric statistical test that checks a randomness hypothesis for a two-valued data sequence. More precisely, it can be used to test the hypothesis that the elements of the sequence are mutually independent. Notice that this was suggested for binary cases but the runs tests can be used to test the randomness of distribution, by taking the data in the given order and marking with + the data greater than the median, and with – the data less than the median (numbers equalling the median are omitted.)

We can run this test using the randtests package in R. Let’s do it for our sample data:

Again, we accept the null hypothesis that was that the sequence of the numbers is random.

Again, we can claim that the numbers are random.

The proposed method is based on the binomial distribution. We can easily run this test in R using again the randests package.

Again, we accept the null hypothesis at 5% level of significance.

Another test that we can run, is the non-parametric “Difference Sign Test”:

Again, we accept the null hypothesis.

1 thought on “How to Test for Randomness”

In this post, we will consider as a reference point the “Building deep retrieval models” tutorial from TensorFlow and we